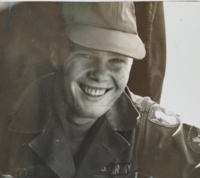 Oolitic – Paul Eugene Allen, 73, of Oolitic, passed away at 11:03 am on Wednesday, August 3, 2022, at Bliss Place in Bedford. Born June 18, 1949, in Monroe Co., he was the son of Estil and Anna (Smoot) Allen. He was an explosives handler at NWSC Crane. He was a veteran of the U.S. Army and retired as a Master Sergeant from the Indiana National Guard. Survivors include four children, Beth Justin (Jon), of Gosport, IN, Roy Dale Allen, of Oolitic, Robert Paul Allen (Ame), of Fayetteville, and Brooke Nicole Stroud, of NC; eight grandchildren, Jett Donald Manning, Clayton Isaac Allen, Connor Robert Allen, Bailee Amelia Allen, Daxton Gene Allen, Eryn BethAnn Allen, Emlyn Denise Barger, and Rosa Marie Barger; a sister, Lois Allen, of Ellettsville. He was preceded in death by his parents, a daughter-in-law, Karena Dawn Allen; two brothers, Tony Ray Allen and Phillip “Spook” Allen. Funeral services will be conducted at 10:00 am on Saturday, August 6th at the Fayetteville Baptist Church with Pastor Kenny Walden officiating. A committal will follow in Hanson Cemetery with Gary Henderson and Gary Bolton officiating and where military rites will be accorded by members of Gillen Post #33 American Legion. Visitation will be from 4:00 pm to 8:00 pm on Friday, August 5th and from 9:00 am until the hour of service on Saturday, August 6th at the Fayetteville Baptist Church. Family and friends may express condolences at www.daycarter.com.