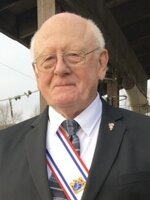 Bedford – Russell Ervin Webb, 75, of Bedford, passed away at 4:15 pm on Saturday, January 22, 2022. Born January 14, 1947, in Lawrence Co., he was the son of Opal Ray and Luella (Walton) Webb. He married Janie Leigh Reynolds on February 8, 1964, and she preceded him in death on November 1, 2015. He later married Rebecca Melanie Brewer on May 26, 2016, and she preceded him in death on February 22, 2018. He was a college graduate with 2 Bachelor’s degrees and a Masters’ degree. He retired as a Lieutenant Colonel from the U.S. Army after 26 years of service. He served in the U.S. Army Infantry and was an Airborne Paratrooper. He was awarded multiple Bronze Stars and Purple Hearts, Master Blaster, Meritorious Service Medal, Vietnam Services Medal, Vietnam Campaign Medal, Vietnam Gallantry Cross with Palm, Expert Infantryman Badge, Ranger Tab, and various other badges and ribbons. He worked in stone mills, Eli Lilly Corp., Carpenter Bus Mfg., as well as safety inspector for various companies throughout Ohio and for Walmart. Survivors include children, Russell Erin Webb, of Fishers, IN, Giuseppina A. Bartlett, of Conway, Ark, Franco K. Webb, of Fayetteville, NC, Jay D. Webb, of Bedford, and Andrew R. Webb, of Ohio; grandchildren, Megan Webb, Jessica Webb, Gunnar Bartlett, Brynna Webb, Kieran Webb, Benjamin Webb, Amanda Turner, John Webb, Kaiden and Chloe Ketchum; a great-grandchild, Keelan Webb; a brother, Ronnie Webb and his wife Lou, of Oolitic; a sister, Marsha Enochs and husband, Rick, of Oolitic. He was preceded in death by his parents, and both wives. Visitation will be from 9:30 am until 10:30 am on Friday, February 11th at St. Vincent de Paul Catholic Church. A rosary service will follow at 10:30 am and a funeral mass will be at 11:00 am with Father Jegan and Deacon Dave officiating. Burial will follow at Green Hill Cemetery where military rites will be accorded. Memorial contributions may be made to St. Vincent de Paul or Knights of Columbus Family and friends may express condolences at www.daycarter.com.