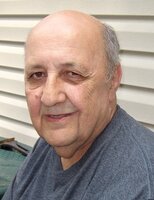 West Virginia – Donald L. Stroud, 77, of Tornado, WV, passed away on Wednesday, December 1st at Hubbard House in Charleston, WV. Born November 20, 1944, in Bedford, IN, he was the son of Curtis and Hazel (Hislip) Stroud. He married Margaret McFadden in 1991 and she preceded him in death in September 2020. He was an electrician with Arch Coal. He was a graduate of Williams High School with the class of 1962 and was a member of the Indiana National Guard. Survivors include a daughter, Deborah Hubbard and husband, Rusty, of Lexington, IN; a son, Gary McFadden and wife, Heather, of Tornado, WV; six grandchildren, James Williams, of Charleston, WV, Matthew Williams and wife, Paige, of Lexington, IN, Dylan Adams and wife, Natalie, of Bloomington, IN, Cody McFadden, Chastin McFadden, and Lacie McFadden, all of Charleston, WV; several great grandchildren. He was preceded in death by his parents, his wife, three siblings, Mary Weeks, Robert Stroud, and Garrett Stroud. Funeral services will be conducted at 1:30 pm on Saturday, December 11th in the Elmwood Chapel of the Day & Carter Mortuary with Pastor David Ferry officiating. Burial will follow in the Mt. Olive Cemetery. Visitation will be from 4:00 pm to 8:00 pm on Friday, December 10th at the Day & Carter Mortuary. Family and friends may express condolences at www.daycarter.com.