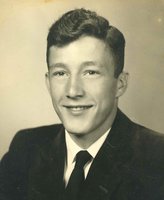 Bedford – Donald W. “Don” Ingle, 84, of Bedford, passed away at 11:45 pm on Saturday, April 24, 2021 at I.U. Health Bedford Hospital. Born November 22, 1936 in Bloomington, he was the son of Kenneth Everette and Mary Elizabeth Susan (Cropp) Ingle. He married Lana Kay Fultz on May 28, 1983 and she preceded him in death April 17, 2016. He retired from the Times-Mail Newspaper as a printer. He was a member of the Indiana National Guard and Hillcrest Christian Church. Survivors include three sons, Mark Ingle and wife, Peggy, of Springville, Jeff Ingle and wife, Barbara, Chad Robertson and wife, Kim, all of Bedford; two daughters, Lori Ingle, of Corydon and Cherie Patton and husband, Derek, of Bedford; eleven grandchildren; nine great-grandchildren; a brother, James Ingle and wife, Linda, of Indianapolis; sisters-in-law, Marsha, Bonnie and Susie Ingle. He was preceded in death by his parents, his wife, and three brothers, Robert, Richard and Kenneth Ingle. “I always wanted to be a newspaper man.” He started as a paper boy and then followed in the foot-steps of his father, Kenny, who had worked at the Bloomington Herald-Telephone. Don started at the Times-Mail in 1966 in the composing department, he was a type-setter, and eventually mailroom foreman. He and his co-workers were often seen “holding up” the corner of 16th and ‘H’ Street. After his retirement from the newspaper, he could be found as the miller at Spring Mill State Park. He and Lana built many friendships at the park, camping, square dancing, volunteering, and supper club. They enjoyed winter trips to Florida and going to car races in the summer. In his early years, he loved riding his motorcycle and could be seen in the middle of winter riding it to work and passed that passion on to his sons. He was a dedicated son who visited his mother every day after work and continued that kind of love to his children and grandchildren. Funeral services will be conducted at 11:00 am on Saturday, May 1st in the Elmwood Chapel of the Day & Carter Mortuary with Pastor Charlie Scott officiating. Burial will follow in the Old Union Cemetery. Visitation will be from 4:00 pm to 8:00 pm on Friday, April 30th at the Day & Carter Mortuary. The family asks that friends consider memorial contributions be made to the Hillcrest Christian Church. Family and friends may express condolences at www.daycarter.com.