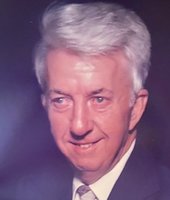 Clifford Ray Barnes, 97, of Bedford died at IU Health in Bedford on Sunday, February 14, 2021. He was born in Beech Bluff, TN on July 17, 1923, the 6th of 8 children born to William Virgil Barnes and Myrtle Stokes Barnes. Cliff graduated from Beech Bluff High School in 1941. He served in the Army from Feb. 1943 to Feb. 1946. He attended Union University at Jackson, TN. Starting in 1949, Cliff worked 12 years for Western Electric Company installing central telephone office equipment. During this time, he worked in various cities throughout Louisiana and Tennessee. In 1953 he married Mary Lou Dennison of Maysville, KY and had 2 wonderful daughters, Jennifer Lynn and Lisa Ann. In 1961 Cliff's family moved to Huntsville, AL where he worked for the Army at Redstone Arsenal. He later worked for NASA at Marshall Space Flight Center. In 1968 Cliff's family moved to Bedford and he worked for the Navy at NSWC from which he retired in 1985. After retirement, he was a volunteer Red Cross driver and spent a lot of time visiting people in nursing homes. Cliff was an avid golfer and although not a great golfer, he was proud of his 2 holes in one and his eagle on the par4 number 7 at Otis. He also loved to play checkers, chess and bridge. Before the coronavirus hit, he and his 3 special friends, Jerry Mullis, Lowell Dawson and Jim Hoffman, played checkers and chess every Thursday. Cliff loved his family and enjoyed the tradition of celebrating birthdays and holidays together. He was proud of his heritage and visited his family in TN often. Cliff is survived by his wife of 67 years, Mary Lou, his daughters Lynn (Vince) Endris and Lisa (Roger) Hoskins, 2 granddaughters and 6 great grandchildren, his sister Ola Mae Lamb and several nieces and nephews. He was preceded in death by his parents, 6 siblings and a granddaughter. Private funeral services for family only will be held at the Free Methodist Church with Pastors Reed Beard and Mike Courtney officiating. Burial will follow in Cresthaven Memory Gardens where military rites will be held.