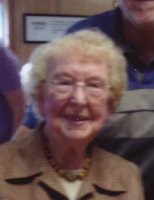 Bedford – Emma Louise Webb, 93, of Bedford, passed away at 2:35 am on Friday, September 11, 2020 at Garden Villa. Born June 29, 1927 in Williams, IN, she was the daughter of Henry and Hazel (Reeder) Wagoner. She married Samuel A. Webb on March 15, 1947 and he preceded her in death on March 27, 2010. She attended Williams High School and graduated from Huron High School after the Williams school burned. After graduation, she worked two years at Crane Naval Depot as a clerk-typist. She also worked for American Printing House for the Blind and worked for ten years as the secretary for her husband during his early years as a Baptist minister. She worked for ten years as the Post Office Supervisor at Judson College in Elgin, IL and retired from there in 1988. She then moved back to Indiana. She was a member of the First Baptist Church in Bedford where she was active in the Women’s Missionary Society and served as their president for several years. Louise was active in the local AARP and the American Baptist Women’s Missionary Society for several years until she was unable to attend for health reasons. She enjoyed writing poetry and had several of her poems published and was the recipient of the Golden Awards. Survivors include two sons, Gary Dale Webb, of Anderson and Keith Edward Webb, of Summitville; grandchildren, Ashley Hussong and Timothy Webb and wife, Krista; great grandchildren, Emily Webb, Arihannah Speece, Keyleigh Hussong, and Joseph Webb; a step-grandchild, Amber Turner; two step-great grandchildren, Joel Turner and Ariah Turner; a brother, Larry Wagoner and wife, Janelle, of Atlantic Beach, FL; several nieces and nephews. She was preceded in death by her parents, her husband, a son, Mark Allen; a brother, Bobby Wagoner; a sister, Lois Williams; daughters-in-law, Carla and Karen Webb. Funeral services will be conducted at 2:00 pm on Tuesday, September 15th in the Elmwood Chapel of the Day & Carter Mortuary with Pastor Lee Brown officiating. Burial will follow in Cresthaven Memory Gardens. Visitation will be from 1:00 pm until the hour of service on Tuesday, September 15th at the Day & Carter Mortuary. Family and friends may express condolences at www.daycarter.com.