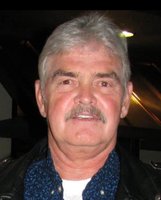 Bedford – Francis Dale Harden, 70, of Bedford, passed away at 11:15 pm on Tuesday, July 28, 2020 at his residence. Born September 30, 1949, in Brown Co., he was the son of Thirsten and Sarah (Spicer) Harden. He married Jo Correll on October 5, 1991 and she survives. He was a set up operator at G.E. for 35 years and a veteran of the U.S. Army serving during the Vietnam War. He was known as a Prankster, Treasure Hunter, Papaw, Handyman, Woodworker, and some referred to him as “The Mayor of Park Avenue”. He was the original “American Picker”. Dale was always available to help a neighbor, or a friend. He loved playing on the floor with his grandchildren. Survivors include his wife, Jo, of Bedford; two daughters, Dawn Schuller and husband, Jon, of New Haven, IN and Tracy Clarner and Danny Welch, of Bloomington, IN; seven grandchildren, J.D., Olivia, and Sophie Schuller, Liberty Clarner, Justice Clarner, Hope Welch, and Billy Welch; siblings, Miriam Altop, of Bloomington, IN, Almeda Harris, of Brown Co., IN, Bruce Harden, of Brown Co., IN, Marshall Harden, of Bloomington; several nieces and nephews. He was preceded in death by his parents, a son, Andrew Harden; a granddaughter, Rose Schuller; seven siblings, Christena Reynolds, Thurston Harden, Mary Alice Elliott, Paul Harden, Louetta Reynolds, Charles Harden, and Richard Harden. Funeral services will be conducted at 3:00 pm on Sunday, August 2nd in the Elmwood Chapel of the Day & Carter Mortuary with Pastor Lee Brown officiating. Military rites will follow, accorded by members of Gillen Post #33 American Legion. Visitation will be from 1:00 pm until the hour of service on Sunday, August 2nd at the Day & Carter Mortuary. Due to COVID-19 masks are required. The family asks that friends consider memorial contributions be made to Honor Flight North East Indiana. Family and friends may express condolences at www.daycarter.com.