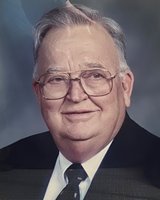 Bedford – Morris Dale Root, 91, of Bedford, passed away at 8:30 am on Wednesday, June 17, 2020 at Garden Villa. Born July 19, 1928 in Bedford, he was the son of Orville and Emma (Myers) Root. He retired as owner of Root Accounting in Bedford and Bloomington and was a veteran of the U.S. Air Force. He married Joanne Duncan on November 3, 1957 and she preceded him in death in 2008. He was a former member of the Elks Club in Bedford, a past president of NLCS School Board, a member of the Sherwood Oaks Christian Church, former board member of the Bedford Parks Dept., Bedford Boys Club, and Gillen Post #33 American Legion. He enjoyed playing golf and watching his grandchildren play sports. Survivors include two sons, Jeff Root and wife, Kelly, Darren Root and wife, Michelle, all of Bloomington; two daughters, Jan Briscoe, Michelle Chastain and husband, Shane, all of Bedford; eleven grandchildren, Jordan Root and wife, Lindsay, Hannah Root, Makinzey Root, Andrew Root and wife, Anna, Meredith Elmore and husband, Gant, and Alex Root, all of Bloomington, Chase Briscoe and wife, Deanna, of Colorado Springs, CO, Corey Chastain and wife, Jacey, of Bedford, Adam Chastain and wife, Hilary and Molly Embree and husband, Patrick, all of Bedford; ten great grandchildren, Madilynn, Logan, Norah, Charlotte, Hudson, Nathan, Mason, Cutler, Hunter, and Lucy. He was preceded in death by his parents, wife, a grandson, Devon Holmes and a brother, Robert Root. Funeral services will be conducted at 1:00 pm on Tuesday, June 23rd in the Elmwood Chapel of the Day & Carter Mortuary with Tom Ellsworth officiating. Entombment will follow in Cresthaven Mausoleum where military rites will be accorded by members of Gillen Post #33 American Legion. Visitation will be from 3:00 pm to 6:00 pm on Monday, June 22nd at the Day & Carter Mortuary. Family and friends may express condolences at www.daycarter.com.