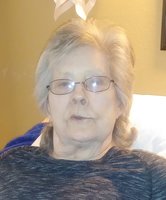 Mitchell – Rosemary (White) Bradley, 76, of Mitchell, passed away at 2:00 am on Thursday, May 14, 2020 at Mitchell Manor. Born November 21, 1943 in Lawrence Co., she was the daughter of Medford “Whitey” and Charlotte (Broglin) White. She was a graduate of Heltonville High School with the class of 1963. She was a CNA and QMA at Mitchell Manor and Gentle Care of French Lick. Survivors include two sons, Guy E. Roberts and Shawn M. Roberts, both of Bedford; a daughter, of Texas; six grandchildren; ten great grandchildren; two brothers, Raymond Ross, of North Vernon and Kenny Broglin, of Ohio; one sister, Sheila Vowell, of Bay, Arkansas; her best friend, Linda Moore, of Paris, KY; and her fur baby/dog, Muggs. She was preceded in death by her parents, her grandparents, John Ellis and Lauda Broglin; two brothers, Kevin Ross and Douglas White; a sister, Iris Johnson. A celebration of life will be scheduled at a later date. No visitation is planned. Family and friends may express condolences at www.daycarter.com.