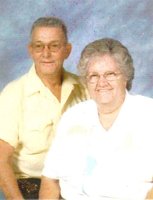 Willard “Simp” Stiles, 84, of Bedford, gained his wings surrounded by his family at 8:30 pm on January 11, 2020 at IU Health Hospice House. Born February 9, 1935, he was the son of Forest and Flossie (Curts) Stiles. He married Pearl Baker on July 8, 1958 and she survives. He was a retired delivery driver for L.P. Gas, and was currently driving a box truck for the Times Mail. He was a veteran of the United States Army. He was a member of the Fayetteville Baptist Church, and a founding member of the Indian Creek Volunteer Fire Department. Survivors include his wife Pearl of Bedford; one son, J.D. Stiles and wife Toni of Bloomington; two daughters, Sondra McWilliams and husband Rick of Washington, and Patricia Sullivan and husband John “Bub” of Bedford; eleven grandchildren; and twenty- nine great-grandchildren. He was preceded in death by his parents; two brothers, Forest Stiles Jr., and Paul Stiles; and two grandsons, Willy Sullivan and Brandon Stiles. Funeral services will be conducted at 10:00 am on Wednesday, January 15th at the Fayetteville Baptist Church with Rev. Kenny Walden officiating. Burial will follow in the Fayetteville Community Cemetery with military graveside rites conducted by the American Legion Gillen Post. Indian Creek Volunteer Fire Department will honor Simp with his final call. Visitation will be from 3:00 to 8:00 pm on Tuesday, January 14th at the Fayetteville Baptist Church. Family and friends may express condolences at www.daycarter.com.